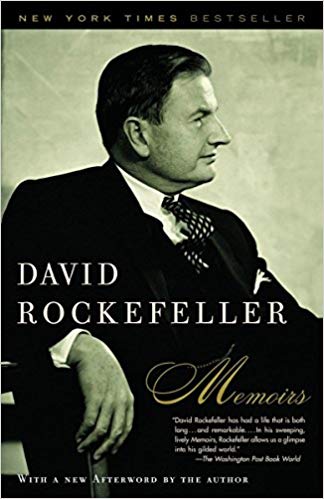 "Success in business requires training and discipline and hard work, But if you're not frightened by these things, the opportunities are just as great today as they ever were."

WRITTEN BY: The Editors of Encyclopaedia Britannica
LAST UPDATED: Nov 13, 2019 See Article History David Rockefeller, (born June 12, 1915, New York, New York, U.S.—died March 20, 2017, Pocantico Hills, New York), American banker and philanthropist who was the youngest of the five sons of John D. Rockefeller, Jr.
He received a B.S. degree from Harvard University (1936), did graduate study in economics at Harvard and at the London School of Economics, and then earned a Ph.D. degree from the University of Chicago (1940). After service in the U.S. Army during World War II (1942–45), he joined in 1946 the staff of the Chase National Bank of New York, of which his maternal uncle, Winthrop W. Aldrich, was chairman of the board. He rose steadily in the hierarchy to become senior vice president in 1952 and was instrumental in the merger (1955) of Chase National and the Bank of the Manhattan Company that resulted in the Chase Manhattan Bank. His rise in the merged institution was capped in 1969 when he became chairman of the board (1969–81) and chief executive officer (1969–80). His speciality became international banking, and he was a familiar figure to ministers and heads of state of various countries around the world, as well as to heads of multinational corporations. In 1973 Rockefeller founded the Trilateral Commission, a private international organization designed to confront the challenges posed by globalization and to encourage greater cooperation between the United States and its principal allies (Canada, Japan, and the countries of western Europe). He attended and contributed financially to the Bilderberg Conference, an annual three-day meeting attended by approximately 100 of Europe’s and North America’s most influential bankers, economists, politicians, and government officials.

The Editors of Encyclopaedia Britannica This article was most recently revised and updated by Adam Augustyn, Managing Editor, Reference

Born into one of the wealthiest families in America—he was the youngest son of Standard Oil scion John D. Rockefeller, Jr., and the celebrated patron of modern art Abby Aldrich Rockefeller—David Rockefeller has carried his birthright into a distinguished life of his own. His dealings with world leaders from Zhou Enlai and Mikhail Gorbachev to Anwar Sadat and Ariel Sharon, his service to every American president since Eisenhower, his remarkable world travels and personal dedication to his home city of New York—here, the ﬁrst time a Rockefeller has told his own story, is an account of a truly rich life.

comments powered by Disqus
<< Previous Next >>